Jennie will be participating in the second annual ComfyCon, which starts TOMORROW!

Huh? What’s that? You can’t possibly travel to a convention with only a 24 hour notice?

Well, you’re in luck: This is an online convention, IN THE CYBERWEBS EVEN!

Throughout the weekend all sorts of webcomic scoundrels will be hosting video panels about lots of fun stuff, and will be offering discounts or special items on their stores, all from the comfort of their own homes.

And you can join them!

An initial schedule has been posted at the ComfyCon website.

Volume 7 at your Local Comic Shop

Our latest bundle of joy is now available for order at your local comic shop. The Diamond ID is NOV131041, which is much less blush-inducing to say than “The Devil’s Panties”.

Also, there is a high likelihood of online video hijinks this weekend, keep your eyes on this space for more details. 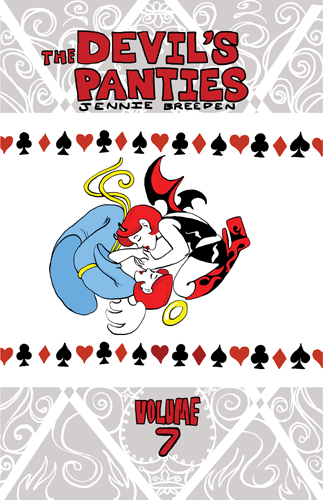 Volume 7 is now available for order on Amazon. It’s also available on Amazon Europe. Which means if you’re in any one of these countries, you get Free Shipping:

Volume 7 collects all the strips from 2012, along with a few extra bonus comics, the usual polish and editing, and over 80 pages of bonus material in the back of the book.

We had a lot of fun making it, and we hope you enjoy reading it.

There’s been a small mix up and we won’t be making it to Hal-Con this year. This brings an unexpected, retroactive close to our convention season.

I’ll post an update if anything new pops up.

The hibernation will last until late January, when we’ll poke our heads out in wonderful Portland. I don’t know if we’ll see our shadows, but it should be fun.

We’ll be a daunting 12 miles from our house this weekend to exhibit at AWA. It’s a nice cooldown convention from Dragoncon, and it’s a great show! It will also mark the 2nd to last convention of this year, then my dearest will visit the frozen north to finish this year’s convention season.

We’re doing something a little different at AWA this year. We’ve made a special limited run of flyers, along with our usual fare. These special flyers belong to a series of 4. Collect all 4, bring them to our table, and you’ll get a free copy of Devil’s Panties Volume One! Three of the flyers will be distributed via the convention bags, and you’ll be able to trade with other people to acquire those three. The 4th however… well, there’s the hunting part.

We’ll be hiding several of these fourth flyers throughout the convention.

To help you find these golden tickets(which are actually white), I’ll be tweeting via @devilspanties over the weekend and dropping clues as to where the flyers are hidden.

BTW we made it, you guys! The Devil Girl plush is FUNDED.

You all reached the goal in the first 4 days of the Kickstarter. Craziness!

We are now in the final stretch of the Kickstarter, and as you can see by that giant progress bar on top of the page, we have some other optional goals in mind. We’re very happy that we got the Devil Girl, but we feel that the Angel and Pretty Princess also deserve a shot at becoming a plushie reality. If you haven’t already pledged, check out the Kickstarter and see if any of the rewards tickle your fancy!

Also, speaking of rewards, while I was looking over the Kickstarter, I realized a lot of the rewards are composed of things that most of you already own(and thank you very much for THAT!). We do have the Original Sin reward for anybody that wants a piece of Jennie’s continuously unfurling tapestry, but that’s about it for you hardcore fans.

So, we’ve been cleaning up the house, and we found a stack of penciled and partially inked comics that were never published. We also found original art that was used in and on Jennie’s first comic book issues and printed books, including some original inks from the playing card decks.

We think you guys would appreciate them and take care of them much better than we would, so I’ve added some reward levels for those of you who want a little something special.

If you already pledged or can’t pledge, share the project on Facebook, Twitter or anything! A LOT of pledges have come from social media, and the further the message spreads, the more likely it is that we can get all three girls produced.

Thanks, you guys are AWESOME!

We’ll be in Atlanta this weekend for Dragoncon. I have a table in the Comic and Pop Artist Alley and I’m on some great panels, come see me!

Title: Down and Dirty Marketing for Authors
Time: Sun 07:00 pm Location: Crystal Ballroom – Hilton (Length: 1)
Description: Navigating the new world of E-publishing and why print is still an important medium for any author platform.

So Jen is doing things a little differently this year. Her and her kiltblowing squad have a fancy new site. If you want to get blown, you have to sign up! They’ll be selecting candidates based on some sort of criteria. The criteria of having what it takes to make a few hundred people scream their lungs out. You don’t have to be a supermodel, or any sort of model, but you will be standing in front of fellow geeks, so costumes are highly encouraged! 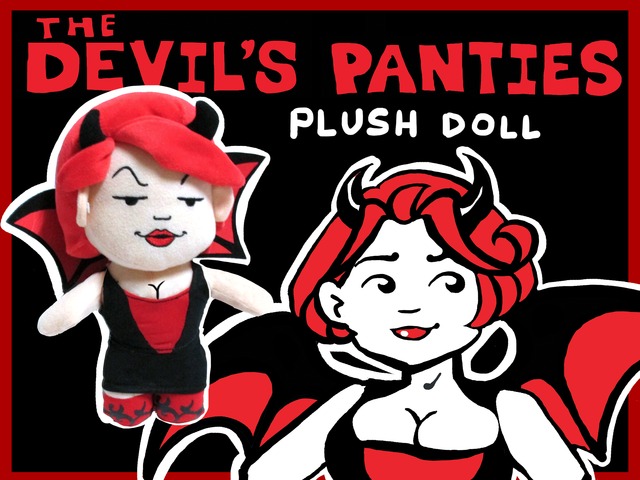 We’ve been keeping an eye on Kickstarter for a while, but we haven’t really had a use for it. All of our operating costs and funds for special projects are covered by the amazing support of your awesome selves. However, we’ve run into a project that’s a little different. Between the cost per unit and the minimum order, these plushies are the most financially demanding thing we’ve ever attempted. We’ve turned away from other endeavors due to lack of funds and uncertainty of demand, but this felt like it needed to be done.

We want to create these plushies and let everyone have a little Devil Girl of their own, but we need your help to make it happen! If you chip in, there’s a bunch of awesome stuff available as rewards for your contribution, from $1 to $1000. If you don’t have a buck, and want to hold your own Devil Girl one day, share the Kickstarter with your friends!

Check it out, and let’s make this happen together!

We’ll be at Gencon this weekend, table 1451. Come to the table for a super secret surprise. No, not that surprise, the other one.

As for the other other surprise… Soon Come.